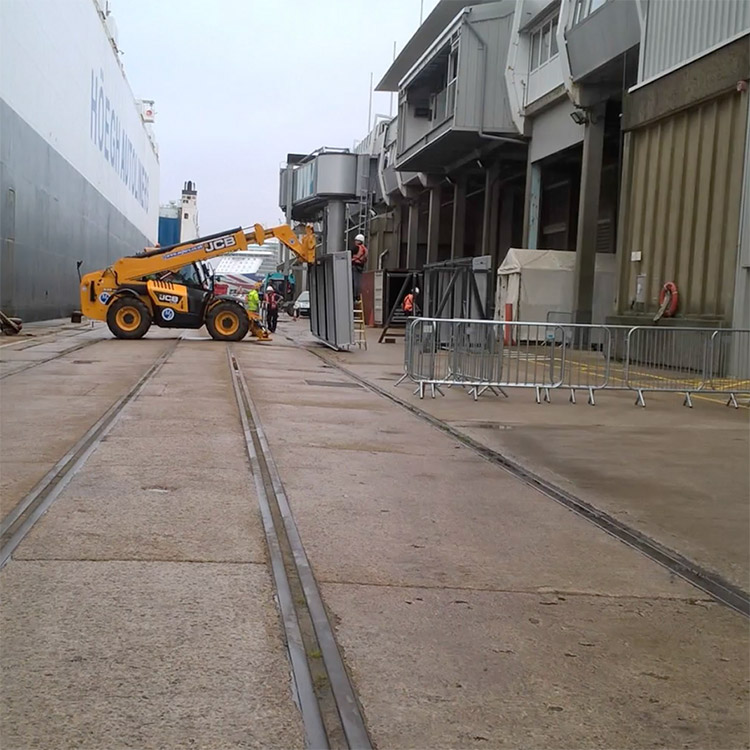 The Anthem of the Seas, owned by Royal Caribbean, has just arrived in the UK’s Southampton Docks, ahead of its naming ceremony, which will take place on April 20th.

The ship boasts robot bartenders, on-board circus training, bumper cars and even virtual sky diving, Flow Rider surfing simulators and roller skating spread over 16 decks and a capacity for almost 5,000 passengers at a time, with over 80,000 people on board this summer alone.

EDS won an order for two huge Passenger Ship Boarding Gates from Associated British Ports (ABP) to provide the vital link between the Cruise Terminal Building and the “Sky Bridge” linking the building to the mighty ship.

“ABP were struggling to locate a firm that had the range of capabilities that EDS could offer, from the initial 3D drawing concept, to the metal work manufacturing and in-house electronics experience to be able to deliver the project within 12 weeks. We have been working 24hr shifts in order to fulfill the order and the timescales are so tight that the gates are being loaded on the Friday 17th April and transported directly to the Cruise Terminal Port with a team of fitters awaiting the arrival to be fitted on the Saturday and Sunday with passengers using them on the Monday, there is no room for error. The Walkway gates have a lot in common with the ship in terms of engineering marvels and we have already received similar enquiries from overseas.”

The Passenger Ship Boarding Gates follows a string of new products for EDS from its own in-house Research and Development team, including the self styled “Thunderbirds Rising Gates”, that with a touch of button the gates rise gracefully out of the ground, other such bright ideas include rising power bollards that come out of the ground and vehicle turntables, that are able to rotate large HGV trucks up to 50 tons in weight 360 degrees, all great space saving inventions that are leading the way for manufacturing in the Midlands.

We use cookies on our website to give you the most relevant experience by remembering your preferences and repeat visits. By clicking “Accept”, you consent to the use of ALL the cookies.
Read MoreACCEPT
Manage consent

This website uses cookies to improve your experience while you navigate through the website. Out of these, the cookies that are categorized as necessary are stored on your browser as they are essential for the working of basic functionalities of the website. We also use third-party cookies that help us analyze and understand how you use this website. These cookies will be stored in your browser only with your consent. You also have the option to opt-out of these cookies. But opting out of some of these cookies may affect your browsing experience.
Necessary Always Enabled
Necessary cookies are absolutely essential for the website to function properly. These cookies ensure basic functionalities and security features of the website, anonymously.
Functional
Functional cookies help to perform certain functionalities like sharing the content of the website on social media platforms, collect feedbacks, and other third-party features.
Performance
Performance cookies are used to understand and analyze the key performance indexes of the website which helps in delivering a better user experience for the visitors.
Analytics
Analytical cookies are used to understand how visitors interact with the website. These cookies help provide information on metrics the number of visitors, bounce rate, traffic source, etc.
Advertisement
Advertisement cookies are used to provide visitors with relevant ads and marketing campaigns. These cookies track visitors across websites and collect information to provide customized ads.
Others
Other uncategorized cookies are those that are being analyzed and have not been classified into a category as yet.
SAVE & ACCEPT